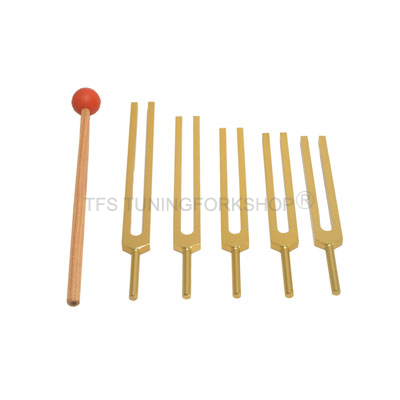 Brain Tuning forks for Sound Therapy. These are high quality machine made tuning forks which are excellent for sound healing and not moulded tuning forks. Free shipping.

Free Rubber Mallet with this Tuning Fork Set. All Forks are in attractive Velvet Pouch.

This Tuning Fork is made in Aluminium metal and anodized with GOLD coating.

GOLD COLOR IS COATED ON TOP OF ALUMINIUM METAL WHICH MAKES IT EVEN MORE EFFECTIVE THAN OUR SILVER FINISH FORKS.

Many healers have experienced this as the combination of color therapy with Sound Therapy is a very effective healing tool.

The Gold color is all over the forks except on the tips as is shown clearly in the pics.

Brain Tuners (set of 5 tuning forks) are produced on the basis of studies of brain wave. EEG or Electroencephalography technology is used to construct various states of consciousness namely Delta, Theta, Alpha, and Beta.

The Brain Tuners are stroked together (one each in the 2 different ears).The 2 parts of the brain join the 2 sounds to create a third, different sound called a binaural beat. The difference between the two frequencies must be small for the effect to occur; otherwise, the two tones will be heard separately and no beat will be perceived.

When the Fundamental Brain Tuner tuning fork is sounded with any of the 4 Brain tuning forks, the difference between the two tuning forks creates a binaural beat which can be heard as a pulsation.Binaural beats reportedly influence the brain in more subtle ways through the entrainment of brainwaves and can be used to produce relaxation and other health benefits such as pain relief. Binaural beat stimulation has been used fairly extensively to induce a variety of states of consciousness, and there has been some work done in regards to the effects of these stimuli on relaxation, focus, attention, and states of consciousness.

To read more about our Tuning Forks