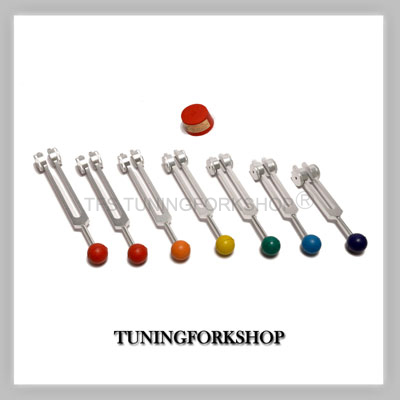 7 chakra with rubber balls Tuning forks for Sound Therapy. These are high quality machine made tuning forks which are excellent for sound healing and not moulded tuning forks. Free shipping.

Free Tuning Fork Activator with this Tuning Fork Set. All Forks are in attractive Velvet Pouch.

These Tuning forks are with Color balls. Each ball corrosponds to it’s chakra color. These balls are removable.

The Chakras are said to be "force centers" or whorls of energy permeating, from a point on the physical body, the layers of the subtle bodies in an ever-increasing fan-shaped formation (the fans make the shape of a love heart). Rotating vortices of subtle matter, they are considered the focal points for the reception and transmission of energies.
The Chakra Set is a set of Tuning Forks that can be used with the chakra system. There are 7 Tuning Forks in this set. It is based on the mathematical rotation of the planets around our Sun. These forks are NOT based on a musical scale. They work more on the cosmic multi-dimensions of our chakras, our not noticeable bodies or subtle parts. They also work on pathways as well as other gateways of energy. The planetary cycle of the solar System is used to arrive at accurate formulae on which these tuning forks have been created. This links them to our cosmic multi-dimensional selves. Our this self is eternal, very not noticeable and approachable through layers, ladders, gateways and manifold levels of energy. These Tuning forks prepare pathways to a Cosmic Universal understanding of Life and our Soul's infinite relationship to it.

In comparison, It is unlike the Harmonic Spectrum Set, which is tuned to the Pythagorean Scale (also known as the Just Scale) and is more in touch with the physical plane of existence and works at a more physical level. The physical plane is more concentrated, crystallized in definite form, cognitive and revolves around the 5 human senses and various parts of our physical body like the tissues, fluids, bones, organs, etc.

A Swiss mathematician and musicologist Hans Cousto had developed them.

These 7 Tuning forks are based on:

To read more about our Tuning Forks